Malamawi Island is just a stone’s throw from the port of Isabela City, the capital of infamous Basilan. While nothing seems to look special from the port, a cross overland, to the other side, brings one to a beautiful white sand beach that has less people.

But before delving into the details, Basilan was once home to one of the most extensive rubber plantations in the country and peopled by the Yakans who were known for their beautiful weave, the island province has always been given a bad rap.

Malamawi beach was some kind of an apparition which gives that feeling of being rewarded with something beautiful after a long drive. The wind was cool. The view of distant Zamboanga Peninsula was near the horizon. The light blue waters were quite inviting. 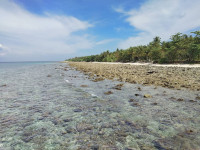